Let’s Talk about [SPOILER] in Solo: A Star Wars Story

So “Solo: A Star Wars Story” came out this weekend to okay critical and box office response.  The film currently stands at 70% on Rotten Tomatoes and 62 on Metacritic, indicating decent reviews, but nothing amazing.  It also opened to a $103 million Memorial Day opening weekend, which is the lowest Star Wars opening weekend since the prequels.  I wouldn’t call it dead on arrival, but it’s got a lot to make back before it breaks even considering the film is the most expensive in the series due to its infamously messy production, which I’ve covered here.

I saw the film last Friday, and I really liked it!  While I don’t think it’s an amazing entry into the franchise, I think it has a lot of bright sides to it.  Alden Erenreich impressed me as Han Solo, and Donald Glover as Lando Calrissian was as suave and smooth as I wanted him to be.  The cast did a great job all around with what they were given, and while the film lacked a clear arc or resolution in my opinion, it was still a fun space adventure where we got to see Han Solo do fun Han Solo things.  I would write a full review, but I kind of feel like I’m behind the curve on that since most critics have already written their reviews.  Maybe I’ll do it soon, but until then, you have my general thoughts on the film.

However, there is one major cameo that shocked literally everyone in the theater I went to.  If you haven’t seen the film, and you do not want to be spoiled, THIS IS YOUR SPOILER WARNING.  DO NOT READ THE ARTICLE IF YOU HAVEN’T SEEN THE FILM.  Read something else, I don’t know, something like how Avengers: Infinity War Deconstructed the Superhero Myth.

Darth Maul was in the movie.  Yes, *that* Darth Maul, the one with the double-bladed lightsaber who supposedly met his end in “The Phantom Menace” when Obi-Wan sliced him in half.  As we can see in the film, he has mechanical legs, and his lightsaber hilt seems to look a little different.  In the scene, Emelia Clarke’s Q’ira uses the ring that Dryden Vos (Paul Bettany) used to call his master, who supposedly is the real leader of the evil crime syndicate Crimson Dawn.  She plugs the ring into a lock, and a hologram appears in front of her.  For a couple seconds we see a hooded figure with pair of mechanical legs and hear an ominous voice.  I initially thought this was the Emperor, but nope, the figure pulls back his hood to reveal Darth Maul.  Actor Ray Park reprises the role he last had in “The Phantom Menace” with Sam Witwer as the voice since Witwer previously voiced Maul in “Star Wars: Rebels.”  Maul tells Q’ira to visit him on his home planet of Dathomir so the two can discuss evil plans.  This is the last we see of Q’ira before she takes her ship and flies off, leaving Han and Chewie stranded. 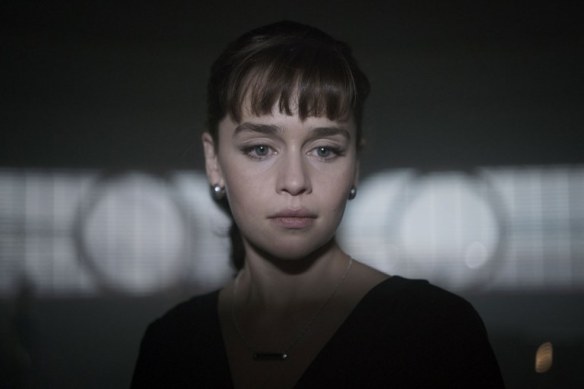 To many viewers, this scene probably was really confusing.  Darth Maul died right?  Well, apparently not.  The first time people found out that Maul had survived his apparent demise was in “Star Wars: The Clone Wars,” a canonical animated series set between “Attack of the Clones” and “Revenge of the Sith.”  He was very much alive and built mechanical legs.  Long story short, he sought revenge on Darth Sidious, who captured Maul in the show’s final season for nefarious reasons.  Maul was heavily featured in “Star Wars: Rebels,” a canon story in the lore about the creation of the Rebel Alliance.  Once again separated from the Sith, but not the Dark Side, he sought to train Ezra Bridger, the central, force-sensitive character in “Rebels.”  When Maul failed to turn Ezra to the dark side, he went searching on Tatooine for a supposed chosen one, who we as the audience know is Luke Skywalker.  There, he went face to face with his arch nemesis, an old, almost Alec Guinness-like, Obi-Wan Kenobi.  The two had a brief duel, which results in Darth Maul’s death.  However, before he died, Maul and Kenobi finally became at peace with each other when Maul asked Kenobi if he’s protecting the chosen one.  Kenobi replied that he is, and Maul responded with his final words by saying that the chosen one will avenge everyone.

That’s perfectly fine and all, but why is Darth Maul in “Solo” is the leader of the Crimson Dawn?  They’re clearly setting up a sequel here since they wouldn’t have added the cameo if not to bring back the iconic character for another film.  First thing is timeline: “Solo” takes place around a decade before “A New Hope.”  “Rebels” only takes place five years before “A New Hope.”  This means that sometime between “Revenge of the Sith” and “Solo,” Maul created Crimson Dawn.  This makes sense, but how come Crimson Dawn doesn’t show up in “Rebels?”  The organization probably got destroyed before then, which set Maul to do his story in “Rebels.”  This is probably what the “Solo” sequel will be centered around.  Perhaps Han himself will even meet Darth Maul.

However, this is my problem with “Solo.”  I think it took too much away from the mystery behind Han Solo.  If we see Han fight Maul and take down Crimson Dawn at some point in a future movie, that’s almost as big of a story as blowing up the Death Star in “A New Hope.”  Han’s story should be what we see in the original trilogy.   In “Solo,” he’s already characteristically similar to Harrison Ford’s version, meaning it doesn’t make much sense for him to have a big emotional arc between “Solo” and “A New Hope.”  That said, I welcome Darth Maul’s return.  It’s nice to know he’s still out there before he meets his end on Tatooine, but I don’t think it’s all that necessary to make him the Emperor-like hooded bad guy of the “Solo” movies.

So those are my thoughts on Darth Maul in “Solo: A Star Wars Story.”  What do you think about Maul’s inclusion in the film?  Do you think he’s going to return for a sequel?  If so, what do you think the sequel will be about?  Feel free to let me know in the comments section.  Thanks!