With “Solo: A Star Wars Story,” staring Alden Ehrenreich in the titular role, coming out this weekend and many of the reviews are in, we now have a good picture of what happened with the film.  As a lot of people who’ve been following the movie for years know, directors Phil Lord and Christopher Miller were fired last year for creative differences with both Lucasfilm President Kathleen Kennedy and screenwriter Lawrence Kasdan.  Kasdan and Kennedy didn’t like the comedic improvisational tone that Lord and Miller brought to the table.  The directing duo became famous for the “21 Jump Street” films, “Cloudy with a Chance of Meatballs,” and “The Lego Movie” so I don’t know what Lucasfilm thought they were going to get when they hired comedy directors do a massive Star Wars film about one of the most beloved characters in film history.

Anyways, Lord and Miller were fired with most of the cast staying, and Ron Howard was soon brought on to finish principal photography and oversee post-production.  Howard, a director behind films such as “Apollo 13,” “Rush,” and “A Beautiful Mind,” which he won two Oscars for, was pretty vocal about the film’s production.  He was given a tough task considering the PR for “Solo” was practically dead with the film still slated to release in months.  Prior to Howard’s reshoots, all we saw of “Solo” was a cast picture with Lord and Miller attached. 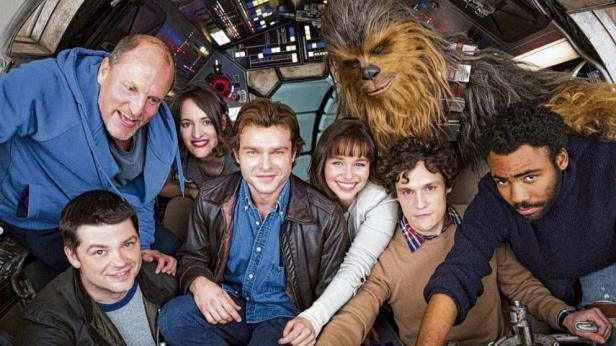 I personally would have loved to see a Lord and Miller version of Solo.  While we don’t know for sure if their film was even good, I think their tone could easily fit in line with who Han Solo is – a half-witted, scruffy looking nerf-herder.  While I still don’t want to see how Han got his name or the Millenium Falcon, at least I’d be able to enjoy a fun comedy from two of the best in the business right now.

With that said, however, Ron Howard isn’t a bad person for the job.  He’s won multiple accolades throughout the years and has both directing and acting experience necessary for a character driven film like “Solo” (or at least that’s what I think “Solo” should be).  “A Beautiful Mind” is a great insight into a single character’s arc, and “Solo” can do something similar.  However (and this is a big however), the marketing for the film indicates “Solo” won’t focus on the titular character as much as it would on the whole ensemble, including Donald Glover’s highly anticipated Lando Calrissian.  Rarely has any Star Wars film been focused on a single character.  In a wide galaxy, it’s impossible to ignore the various planets, aliens, and cultures that exist.  Also, I think most people just want to see a standalone Lando movie if anything.  This isn’t really Han Solo’s story: there’s no indication that we’ll follow his encounters with Jabba the Hutt, Boba Fett, and many other bounty hunters in the rarely seen criminal underworld of scum and villainy.  Then again, I haven’t seen the movie (seeing it this weekend), but still there’s no indication so far that “Solo” answers any of the big questions surrounding how he wound up in the smuggler life.

The film currently stands at a 71% on Rotten Tomatoes and a 63 on Metacritic.  This would make it the third lowest rated Star Wars film on both sites behind “The Phantom Menace” (55%, 51) and “Attack of the Clones” (66%, 54).  On Rotten Tomatoes, it’s behind “Revenge of the Sith” (79%, 68), and on Metacritic, it’s behind “Rogue One” (85%, 65).  Of the new Star Wars films, it’s far behind “The Force Awakens” (93%, 81) and “The Last Jedi” (91%, 85).  The general consensus on Rotten Tomatoes states: “A flawed yet fun and fast-paced space adventure, Solo: A Star Wars Story should satisfy newcomers to the saga as well as longtime fans who check their expectations at the theater door.”  To me, this feels a lot like “Jurassic World,” a serviceable and fun entry into a famous franchise that yet lacked the heart of the original.  “Solo” is not the movie you want to lack the heart of the original trilogy, and to me, the film came off as a bland corporate decision that leeched off of our fandom.

It’s probably going to be fine.  However, that’s not what I want in my Star Wars films.  “The Last Jedi,” while controversial, challenged audiences to truly dig into the Star Wars lore.  It reshaped, re-contextualized, and subverted certain aspects of the series and made a point that for the new Star Wars to live, the old must die.  This ideology seemingly stemming from the creative team at Lucasfilm doesn’t hold up with “Solo,” a fun throwback at best and a nostalgic cash grab at worst.

I know I’m judging the movie too harshly.  Maybe that’s because I don’t want the magic of Star Wars to go away for millions of new fans.  I remember when I saw “The Force Awakens” in theaters on opening night.  It was my first experience watching a Star Wars movie in the theaters, and I even skipped a day of school for it.  Three years ago, Star Wars felt like a generational experience, not just another summer blockbuster.  With “Solo” releasing this Friday, three major big-budget tentpole films are going to be out at the same time.  Star Wars isn’t an event anymore, it’s now just one of the many things that audiences can watch.

I just wished that the franchise would slow it down a couple notches and (as another famous series would commonly say) boldly go where no one has gone before.

Those are my thoughts on “Solo: A Star Wars Story’s” production!  What do you think about this?  Feel free to let me know in the comments section.  Thanks!

If you like this article, be sure to check out how the Russo Brothers managed to deconstruct the superhero myth!