The big question of David Gordon Green’s “Halloween” is if it can succeed where its predecessors have failed.  If that’s all you’re wondering, I’m happy to say that this new sequel is the best in the franchise since the 1978 John Carpenter classic without a doubt.  It pays homage to the film that started the slasher genre yet adds exciting new elements.  While it’s not without some glaring flaws, it’s boosted with an incredible performance by Jamie Lee Curtis as Laurie Strode and John Carpenter’s relentless score.

I watched the 1978 “Halloween” a few years ago, and I’ve only seen the first few sequels, which pale in comparison to the original.  “Halloween” was the first slasher film I had ever seen, which is fitting considering it’s the quintessential flick of the genre.  It was simple, effective, and had a great use of tension.  The subsequent sequels tried to focus on the lore behind Michael Meyers, and I never really understood that.  I liked how in the original, Michael Meyers/The Shape was just this scary guy with a knife who becomes fixated on Laurie Strode, but the sequels tried to tie it all together.  Suddenly, Michael and Laurie were siblings and Michael was some kind of monster instead of a guy.

This movie wipes away all of that.  This is a direct sequel to the original set exactly 40 years after that night.  Michael is in some kind of special asylum being studied by a doctor, and Laurie has become emotionally traumatized by the incident.  When the state decides that criminals in this asylum place should be moved, Michael breaks out and wreaks havoc on the fateful night of Halloween.  However, Laurie has been preparing for this moment for decades and will do anything she can to stop Michael before he harms more people.

It’s a simple premise, but it works because of Laurie’s characterization.  Jamie Lee Curtis plays her perfectly.  She’s not the all-American girl she was in 1978.  She’s a broken person, one who’s life was constantly affected by her encounter with Michael.  She has mostly cut herself off from society and become estranged from her family.  Curtis steals the show at every turn, adding a frightened urgency to the script.  Though she has been preparing for this moment her whole life, her performance shows us that she’s still frightened by Michael.  If she was just out to kill Michael, I don’t think the movie would feel as scary as it should.

The supporting cast is also great for the most part.  In classic horror fashion, there are plenty of characters clearly there for Michael to kill later on, and the movie does a good job setting that up.  Judy Greer does a good job playing Laurie’s daughter, who herself has become traumatized by her mother’s behavior.  While Andi Matichak does a great job playing the granddaughter, certain parts of her subplot feel like a different movie.  Her friends are for sure in a Halloween movie, but it takes a while for her to regroup with everyone else.  Michael Meyers himself, played by Nick Castle, isn’t much of a performance as he is a physically imposing concept so he works in that regard.

One thing I should mention about Michael is he’s a lot more brutal in this movie than he’s ever been.  I don’t know how I feel about that, but I guess it makes sense since he’s been locked away for 40 years.  In the original “Halloween,” Michael kills five people before attempting to kill Laurie, but he’s much more violent in this.

His doctor keeps bringing up a point about how Michael is psychologically affected by his actions.  I wish they could have expanded on this concept because it could have added a “Silence of the Lambs” element to the film.  Screenwriters Green and Danny McBride definitely wanted to draw a parallel between Michael and Laurie as their encounter with each other changed their lives.  However, Laurie gets much more of an emotional treatment.  I think if they wanted to introduce a human element to The Shape, they should have gone for it rather than simply scratching the surface. 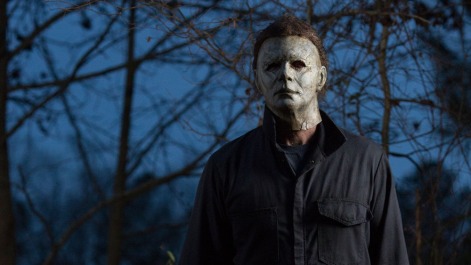 As for my issues with the film, there was one scene towards the third act that took me away from the story.  I was talking with a few people after the screening, and I guess it sort of makes sense from a weird angle.  However, it felt so forced, and it didn’t even affect the rest of the movie aside from adding more violence.  Moreover, certain characters are introduced and set up to be supporting roles, but then we never see them again when the third act hits.  There’s one comedic performance in the second act of this kid that was hilarious, but while it was funny in the moment, it never went back to that character so it feels superfluous.

On a positive, Green adds a good visual style to the film.  There a lot of fun and creative cinematography decisions that play with tension while keeping a lot of John Carpenter’s directorial decisions from the first film.

The movie also features the return of Carpenter’s iconic score.  Carpenter scored this along with his son, Cody, and Daniel A. Davies.  It takes clear cues from the piano-string-synth tones of the original while adding some more updated orchestral moments.  The movie itself is paced faster than the original, and Carpenter keeps the film on tempo, creating a crescendo that builds to the final scenes, which are easily the best parts.

That’s the thing about this film – it has a lot of flaws in the middle, but has such a good beginning and ending that I’m willing to overlook them.  It’s also satisfyingly ties a bow on the series and doesn’t really leave you longing much more.  It’s the perfect popcorn flick to watch on your Halloween, and I think it reinvigorates the franchise for one final high note.

So that’s my review for “Halloween!”  What’s your favorite horror movie to watch on Halloween?  Please feel free to let me know in the comments section.

As always, thanks for reading and Happy Halloween! 🎃