Rampage stomps on previous video game adaptations, but still shows the genre has a long way to go.  Dwayne “The Rock” Johnson stars in this Brad Peyton directed video-game adaptation about a gorilla that grows to a massive scale and destroys the city of Chicago.  Does it sound fun?  Yes.  Does it sound cheesy?  Yes.  Is the movie both?  Also, yes.  Given its laughable script, often jarring CGI, and fumbled use of character, Rampage salvages itself with Dwayne Johnson’s show-stealing charisma and all-around lighthearted mood.

The film centers around primatologist Davis Okoye, played by Johnson, as he takes care of animals endangered due to poaching, including his friend albino gorilla, George.  However, when George and a few other animals become exposed to a mysterious toxin that mutates their DNA, causing them to grow to a massive scale, Davis must stop the giant mutated animals from rampaging through the city of Chicago.  While the plot is rather generic given Hollywood’s recent obsession with giant CGI battles that destroy the city, the film was doomed in my opinion from the start.  When a trailer sums up the entire film in two minutes and gives away almost all of the plot, you know you’ve spread too thin.  This film’s story is something most audiences have seen plenty of times before, and no matter how much CGI spectacle was thrown at my face in the theater, nothing caught me by surprise.  With that in mind, I think if you just want a fun, mindless action movie for two hours, Rampage should do just fine.  I would say that with reserve since the much better Ready Player One is still in theaters with the highly anticipated Avengers: Infinity War right around the corner.

The major selling point of this movie is “The Rock.”  You know those role playing games where you get to assign stats to characters?  Dwayne Johnson is as if someone took all their points and put them equally into strength and charisma, and since he’s The Rock, both of those skills somehow got doubled in the character creation process.  He’s the best part of the film and continues to remind why we can sometimes go to a movie just for one actor.  The core of this film is his relationship with George, and Johnson definitely sells his preference for animals over humans.  You learn why Davis Okoye dislikes humans doesn’t get attached to them.  However, I was expecting some kind of payoff at the end or a lesson that he learned.  I don’t think Okoye changes his perspective on humans.  I loved Johnson’s last film, Jumanji: Welcome to the Jungle, because he plays the opposite of his familiar tough-guy character trope and gets a wide range of comedy to play with.  In Rampage, Johnson is back to his generic role, and it’s kind of getting old.  I understand, the man is an action star, but even past action stars such as Tom Cruise, Bruce Willis, and Sylvestre Stallone played against their types.  Cruise’s comedic turn in Tropic Thunder was far more memorable than that of Jack Reacher.  I wish Johnson would have taken on a role with a little more variety because the man is hilarious.  One of my favorite performances of his was in Moana because he got to showcase his singing talent.  However, as The Rock says in the film when told that punching people isn’t the only solution, “I do know that, but that’s no fun.” 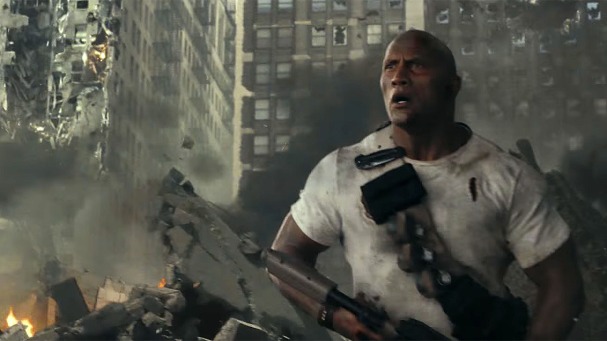 While The Rock is a serviceable lead and does the best job with what he has, the supporting cast often falls flat other than a fun performance from Jeffrey Dean Morgan as a government official.  Naomie Harris gives an okay performance with what she’s given in the script, but her character is ultimately the average scientist good guy who’s against big corporate overlords.  There are two supporting characters who have an awful lot of screen time in the beginning, but are never shown again.  This was misleading and might point to potential script rewrites during the filming process.  The two villains are about as generic as it gets, but somehow they’re worse than the average villains because their plan doesn’t make sense.  They have these genetic mutation drugs to test on animals and then they want to force them to Chicago, but I don’t know why.  Whatever reason they have to destroy the city, they’re still destroying their own corporate buildings.  That seems like unnecessary collateral damage.  I understand, the writers wanted the mutated animals to go to the big city and destroy things just like they did in the game, but here it comes off as lazy since they don’t explain what the big deal is with Chicago.

The film was directed by Brad Peyton, who has worked with Johnson in the past with Journey 2: The Mysterious Island and San Andreas.  He seems to be a competent director with big sets and it shows in this film.  The entire third act demolishes all of Chicago and Peyton handles it well by seamlessly transitioning from the ground to aerial shots of the mutated animals destroying buildings.  However, Peyton seems to forget to add something more than generic mayhem.  Everything about this film is just a safe bet, and while that looks good on paper, I don’t think it’s going to click well with audiences considering they can see plenty of films in the theaters now.  We’re about to hit the summer blockbuster season of movies, and there’s no way Rampage is sticking around for much of it because the film itself doesn’t do anything to stick out.

This also isn’t Johnson’s first video game movie as he starred in the critically panned 2005 film, Doom.  While Rampage is a big step up from that film, it doesn’t do much to raise the low bar currently set by video game adaptations.  In my opinion, the best video game film was Warcraft, but even that wasn’t incredible.  I haven’t seen the new Tomb Raider so I can’t make a judgement.  As far as Rampage’s ranking in video game movies is concerned, it falls in the Doom and Hitman category of forgettable films.  It’s not as campy as Mortal Kombat to be so bad it’s actually kind of good, and it’s not as visually amazing as Warcraft.  Everything about Rampage screams “meh.”

When a film is so mediocre and safe, the final product is less than the sum of its parts.  I usually write a lot more for reviews, but the viewing experience was hollow and lacked the spice to motivate me to write more.  I couldn’t latch onto any of the characters besides Johnson’s at certain times, and the whole film just happened.  It’s a two hour popcorn flick at best that I certainly won’t remember in a few days.  Hopefully, the next Brad Peyton/Dwayne Johnson team up won’t be as bland.

So that’s my review of Rampage!  What do you think of the movie, and what’s your favorite movie with The Rock?  Feel free to let me know in the comments section.  Thanks!