Okay, this one’s gonna be short because I feel like I already sort of forgot the movie and it’s only been a couple hours since I’ve seen it.  Granted, I literally went from this movie to a film festival where I saw over a dozen short films (some of which were better than this).

I feel really bad writing this review.  I absolutely loved the first Pacific Rim.  I thought Guillermo Del Toro did a fantastic job setting up this epic scale kaiju war.  At the end of the day, it was giant robots fighting giant monsters, but Del Toro brought a clear passion to every scene and detailed every shot with care.  For the sequel, I was pretty worried from the start because Del Toro wasn’t really involved and he carried the first film.

I think to look at why this film was made, we have to take a look at the first film.  2013’s Pacific Rim wasn’t a domestic hit.  It opened at #3 at the box office and grossed a little over $100 million stateside.  That’s completely fine for new IP, but the film cost a whopping $190 million.  Most Marvel movies don’t even get that much so a $100 million domestic pull wasn’t really that much and would be considered a big disappointment in most cases.  That’s where the worldwide box office and specifically China’s box office came in to save the day.  The film grossed $411 million worldwide, which was enough to break even and possibly even turn a profit after merchandise sales.  $111 million of that was from China.

When the sequel was announced, I kind of figured it would follow Michael Bay’s style of catering to Chinese audiences by setting the film in China and hiring Chinese actors.  This is a great international marketing move, and luckily Uprising integrates it pretty seamlessly.  However, at its best, that’s what Uprising feels like: a glorified marketing play for China.  Half the film is spoken in Mandarin, and most of it feels like the type of aggressive CGI cluster that only Bay could do.  I don’t know if it’s just me, but it seems as though those types of films do well overseas so the overuse of CGI was probably an international business move.  The other thing I figured was the budget cut, and boy, does it show.  While a $150 million price tag is a lot in blockbuster terms, Uprising lacks the extra practical finesse that made the first one so great.  Maybe it’s just me, but Del Toro’s world had a poppy color to it that I think Uprising failed to recreate.  Maybe that’s on Director Steven DeKnight or just the lower budget.  However, I think Del Toro’s visual flair wasn’t a budgetary thing since the practical effects probably cost less.  I don’t know, something was just visually missing.

Okay, let’s talk about the plot.  John Boyega plays Stacker Pentacost’s son, Jake, a rogue badass dude.  Boyega’s first line, “I am not my father,” sums up the disconnect I felt with Pacific Rim Uprising.  While he’s cool, he’s no Idris Elba.  It’s been 10 years since the events of the last movie, and the Kaiju breach has been closed.  However, Jaegers are still a thing, but now there are these drone Jaegers, but like one of them goes rogue and like a bunch of buildings get destroyed bro.  Like seriously, we’re talking Man of Steel body count territory here.  Oh yeah, back to the plot.  The rogue Jaeger (called Obsidian Fury) destroys things and Jake learns the true meaning of being a hero.  If you think you’ve seen that a billion times before, it’s because you have.  The plot is incredibly stale for something as awesome of an idea as giant robots fighting giant monsters.

Perhaps the main flaw is its characters.  John Boyega basically does all the heavy lifting in the film and acts as charismatic and charming as ever.  However, the problems start to arise when you look at the supporting cast.  Scott Eastwood’s character is your generic military dude.  The girl played by Cailee Spaeny is your generic rebellious teen, and she kind of reminded me of the character in Transformers: The Last Knight, the one who was all like “yeah I’m tough, I fight robots,” but then she doesn’t do much.  At least Spaeny’s character fought hard in the end as she gets to pilot her own Jaeger and makes a decent bond with her fellow cadets.

The main person who’s missing is Charlie Hunnam’s character from the first film.  Hunnam decided to film King Arthur: Legend of the Sword instead, which I’d say was a fair trade off.  I liked King Arthur more than most people, but it’s not much better than Uprising.  I think Uprising could have benefited a lot more from Hunnam than King Arthur did because DeKnight could have crafted a better story revolving around characters we’ve gotten to know over the last film.  It’s weird to see such a high profile sequel be so distant from its predecessor despite the movie timelines not being so far apart.

Then there’s Charlie Day’s character, Newton.  I can’t really go into detail in case you’re planning on seeing the film, but man, it’s weird.  I’ve read other reviews for this movie, and they all seem to agree – Charlie Day was just not fit for this character.  I’m sure he had a great time with it, but on screen it comes off as cringy.

But then again, that’s most of this movie – eyerolls and cheesy one liners.  The humans are reduced to action figures at best, and the dialogue is mostly pointless.  However, that’s not what I signed up to see – I wanted giant robots fighting giant monsters.  When it happens, it’s awesome!  Turn your brain off and watch the mayhem without any remorse for the expenses in collateral damage!  I sound like a crazy person right now so I’m just gonna back off.

Also, I don’t know if I remember this correctly, but I feel like I’m really forgetting this movie as I’m writing this review so I’m just gonna jot it down.  I saw a lot of weird dutch angles in the film, and I didn’t really buy into them.  That’s just a little nitpick, but it’s worth noting.  It kind of reminded me of Battlefield Earth.

Overall, Pacific Rim Uprising is a massive disappointment for me.  While there are some fun scenes, it never lives up to its predecessor.  The plot is about as generic as it gets.  It’s the mediocre parts of Power Rangers mixed with the mediocre parts of Transformers to make for a below average action movie.  It even blatantly sets itself up for a sequel, and if they make one, I hope it’s better than this one.  On a scale of one to ten, I’m giving Pacific Rim Uprising a disappointing 4.5. 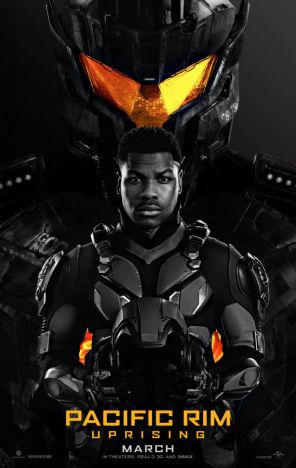