Hello, everyone, welcome back to my reflection on the making of my short film, “Duet.”  As many of you might not have known, I have been working on a short film called “Duet” for the past two months.  This was arguably the most challenging task I had ever done, and it was the reason that I wasn’t able to post as often as I normally do.   I thought it would be nice to write about the process of making this first film since it might help out some readers who are aspiring filmmakers.  Also, the film is currently funding on Kickstarter so feel free to check that out  🙂

Finally it was time to begin filming with a little less than a week left on the clock.  Luckily, the school allowed us to use some of their locations as sets.  The first day of filming was difficult since we had to move everything in our band room to create the set necessary for the piano composition class.  Once we had that down, we got permission to keep the band room in that position for the next week, which made filming in that room a lot easier.  Also, filming was hard at first since we weren’t in a rhythm yet, but we slowly found a good pace and certain tasks on set eventually became routine.  As the days rolled by, we kept filming scenes.  We blocked certain scenes together by filming location so that we could knock them all out at once.  The cast and crew worked overtime to get everything right, which is extremely generous of them.  Looking back on the process, we really lucked out with our cast and crew as everyone was just so passionate about making this project a reality.  We also really lucked out on our cinematographer, who is an absolute genius when it comes to shot composition and lighting.  Everyone knew that making a film is a team effort and everyone worked equal amounts of time to make the best film possible.

Everything was going relatively well (with a few minor stumbles here and there) until the very last day.  There was a ton of filming to crunch in one day, and it was the last day that worked with the schedules so we had to do it all on that day.  We had to film the first scene, which had the school principal (awesome guy) play a store owner, and the final scene, which took place in an auditorium.  Long story short, I got in a ton of trouble trying to move a massive piano with the crew up an elevator, and I spent two hours talking with authoritative figures trying not to get disciplinary action.  There was a whole communication issue that I’m not going to get into, but basically I misinterpreted something, and I acted too quickly in the heat of the moment so that we could maintain our crammed schedule.  It was an utterly stupid move on my part.  I honestly think I was so blinded by fear of this film not getting made that I failed to take into account the potential negative consequences of my actions.  As pretentious as it sounds, I was just so consumed by my own creation that I couldn’t think of anything else at that point.  After talking with probably the most forgiving people ever (if any of you are reading this by some chance, thanks so much!), I was allowed to finish filming.  The actual filming of the day went really well, but I really couldn’t talk much after my incident from earlier.  Even though everyone yelled “that’s a wrap” and the filming aspect was over, I didn’t sleep that night.  I’m happy to say that I really had time to reflect on what happened that day, and found that the best cure to making a mistake is to accept that mistake and become more diligent.  Communication is key in any project, and I can’t take it for granted.  The inadequacy of it can lead to serious consequences.  I learned an important lesson on the last day of filming, and I won’t forget it.  While it was a roller coaster of a project for everyone involved, all rides come to an end, and it turned out much better than I thought it would.  It was the end of an era, but the start of another. 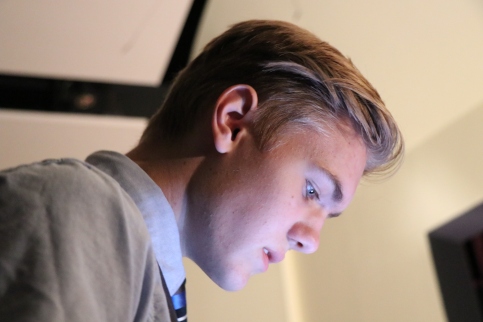 The film is currently in post production and is expecting an online release in September 2017.  Post production is pretty much a third of the project, and it doesn’t help that I’ve been working for the past couple of weeks at my summer job (Computer Science instructor at a summer camp at UMD College Park).  Due to lack of chances to work on Duet, I am putting the release in September just in time before college starts.  Right now, however, the film is funding on Kickstarter (https://www.kickstarter.com/projects/mohitp/duet-a-short-film-0).  Given the hundreds of cumulative hours in this film, we think it makes sense to pay the cast and crew for their generously provided time.  All of the people who have worked on this film are students so everyone had a tough time balancing between school and this production.  $575 would go to the actors and $500 would go to the crew members.

The second biggest portion of the Kickstarter’s earnings would go to the film’s August premiere screening in Baltimore, Maryland.  As a filmmaker, it’s always been a dream of mine to hold a premiere and celebrate a work of art that was the collective goal of so many people.  Honestly, when I originally wrote the script, I, along with many others, didn’t think it would get made.  The fact that I ever said the words ‘That’s a wrap’ is a huge deal to me.  Given the countless hard worked hours by everyone, I think a premiere screening is warranted.  There were so many people who have helped us along the way, and I have to thank my school for allowing us to film for large periods of time on campus.  We’re all really proud of the film, and we would love to have an event to show that all the hard work really paid off.We contacted some theaters in the city and gave a rough estimate of the time we would need for the event, and the average cost was $1000 given the event booking and catering.  $100 of the payment will be going towards visual effects.  Though this isn’t some CGI gonzo, there are some visual touches that would really enhance the viewing experience.  We can’t give anything away, but you’ll see what we mean in the final film.  Also, $50 would go to the artist who designed the amazing promotional graphics for the film.  $300 of the funding will go towards the Kickstarter rewards.  This includes ordering the DVD’s, Blu-Ray’s, Posters, and Jewel Cases.  While the reward costs could be more if we raise more than our goal, this is the minimum we would need to order the Kickstarter rewards items.  Finally, $175 goes towards covering the 7% Kickstarter fee.

Overall, even though the process was extremely strenuous, I would 100% do it again.  There’s just something exciting about making a film that makes me want to write another script and do a better job on the next one.  Through the hardships of writing, casting, filming, and editing, I made some new friends, which is always awesome.  I learned that communication is the single most important thing when creating a project of this size.  This is a collaborative effort so everyone has to think for the team.  These are great lessons, but perhaps the best thing I learned during this process is that it’s ultimately just a film.  There were times especially towards the end in which I felt that I just wanted to end the whole process.  This sometimes caused me to lose my sanity, which is weird since I did this in the first place because I thought it would be fun.  I didn’t foresee all the complications that would occur during the process of making this project come to life.  I really just wanted the whole thing to end by the last day of filming.  However, what kept me going despite all the hassles along the journey was that there is nothing more satisfying than making art.  Art radiates a powerful feeling that inspires us, and making it is the best feeling in the whole wide world.  Thank you.

That’s a wrap, everyone!  Thanks so much for reading as it really means a lot to me!  Once again, the film is currently funding on Kickstarter so feel free to check that out if you want.  Thanks!